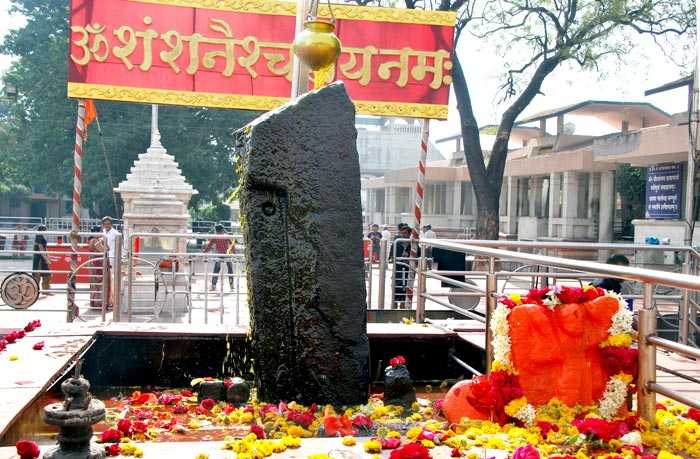 Shani Shingnapur is a quaint town located about 76km off Shirdi and about 350 km off Mumbai. It is popularly known for its famous temple. The village has a presence in history with many of the yesteryears rulers making it their home. Due to the significance of the lovely Shani Shingnapur Temple, the quiet village manages to attract a lot of visitors- many pilgrims who come to take blessing from the Lord Shanishwara (The Lord of the Planet Saturn). This temple is one of the most popular haunts for the devotees of Shani Devta. It attracts a lot of crowds and many even go into trance but looking at the deity.

People for long had tried to make a canopy over the idol, yet all the efforts had gone down the drain. To the north of the erect idol is a huge Neem tree. Sometimes the branches of the tree stretch to such an extent that it casts a shadow over the idol. Yet, whenever that has happened, the branch has automatically broken and filled down, allowing this magical idol to bask in all its glory under the open sky.

Legend has it that during a thunderous flood, the black slab was carried by the currents and got stuck in a tree. After the flood, few of the villagers tried to remove the slab from the tree. The moment they started doing so, blood started dripping from the slab. Fearful and scared of the consequences the villagers left the slab, believing it to be cursed and left. On that very night, one of the villagers had a dream, where Shani Devta himself made an appearance and declared that he was to stay there itself in the form of the slab. The villager immediately rallied the news to everyone in the village, and the ‘temple’ was installed.

Shani Dev is the God of Justice. He is the one who decides the destiny or fate of an individual depending on their karma- work. In popular mythology, he is said to be the son of Surya- The Sun God. 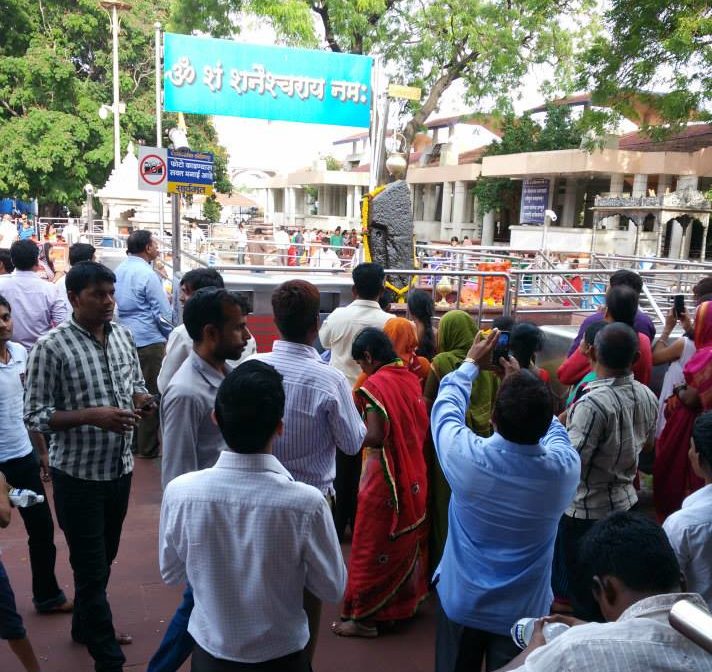 He is also believed to be the elder brother of Goddess Yamuna and the younger sibling of Yama. Yama is the god of death, who is responsible for meting out punishments after death. Shani Dev, on the other hand, is known to be punishing individuals based on their misdeeds on this very life.

There is another popular legend, that says the Shani Dev was the son of Surya Dev and Sadhna. They had two sons and four daughters. However, Sadhna after some time was unable to bear the heat of Surya Dev. She then came up with a plan to find her clone and ask the look alike to stay with Surya Dev. Sanvarna was the look-alike, who then started her life with Surya Dev who was unaware. One day Shani Dev was repeatedly kicking Sanvarna, and out of frustration, Sanvarna cursed the little boy that he would become lame in one leg. Surya Dev overheard this and realised that no mother could say such a thing to her own child. He understood the farce and then blessed Shani Dev by saying that he would be worshipped by people. He also mellowed down the curse.

This temple unlike any other popular temple in India is truly humble and simple. The temple is devoid of any fancy decoration or any marvellous architecture. It is simply a black slab, which represents Lord Shanishwara, with no ceiling on top of it. The black slab stands upright on a platform under the vast open sky. No other Shani temple has the deity resting under an open sky.

It can hardly be called a temple. Yet, the sheer crowd of devotees that throng the place is a sight to behold. The ‘temple’ doesn’t even have a priest. Thousands of devotees that come every day can perform any puja or ritual all by themselves. This is unheard of in any temples. This abode might be simple, yet the devotion and the magic that it packs is beyond any power. The place is always ringing with pilgrims who come from far off lands and fill the place with a divine presence.

Since this is a popular pilgrim place, there is a ‘devesthan’ or a staying place that is available for the devotees. It is open to everyone through the day and night and one can avail a clean room for three people for just 100 rupees per night.

There is also a ‘prasadalaya’- which is the dining hall. Freshly cooked, and deliciously piping hot food is available for lunch and dinner. The food is lip-smackingly delicious and reflects the devotion of every cook who has made the food with utmost care and love. The food coupons are priced at 15 or 20 rupees per head.

The village of Shani Shingnapur is about 156 years old, and the most fascinating and awe-inspiring sight is how no single house or shop has any door frame or any other measures of safeguards in their homes. The houses or shops use a simple bamboo partition or a curtain to cover the main entrance, except that it is kept bare open. It is also mandatory that the curtains must be transparent. 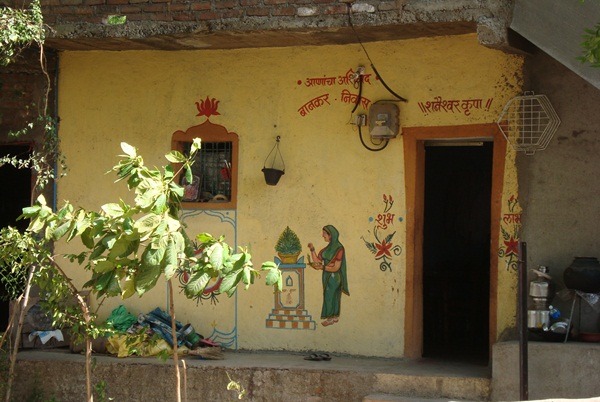 For long this town had no police station. Recently, along with a police station, a post office, a guest house, and even government buildings were constructed as well. All of these buildings also follow the same principle- no doors.

It is strongly believed by the locals that whoever dares to steal anything will have to face the wrath of Lord Shani. They firmly hold that the town is protected by Shani Dev and they do not need any other protection.

There are about 6500 residents, and none of them even believe in the concept of having safeguards inside their homes. They do not have lockers, cash boxes or even locked cupboards to safeguard their belongings. Such is their faith that even when they leave town, they do not ask their neighbours to keep watch.

United Commercial Bank opened its first branch in this village and was termed the first lockless bank in India. Keeping up with the principles, the doors of the bank is kept open all the time

Snakebite- it is said that the people of this village, upon an incident of snake bite, get the patient to the temple white clothes. The male relative then performs a ritual and pours water over the Idol. After drinking that water, the victim is them miraculously cured.

The Lamp- There is a lamp right in front of the Moolasthan that keeps burning all the time. It hasn’t stopped once.