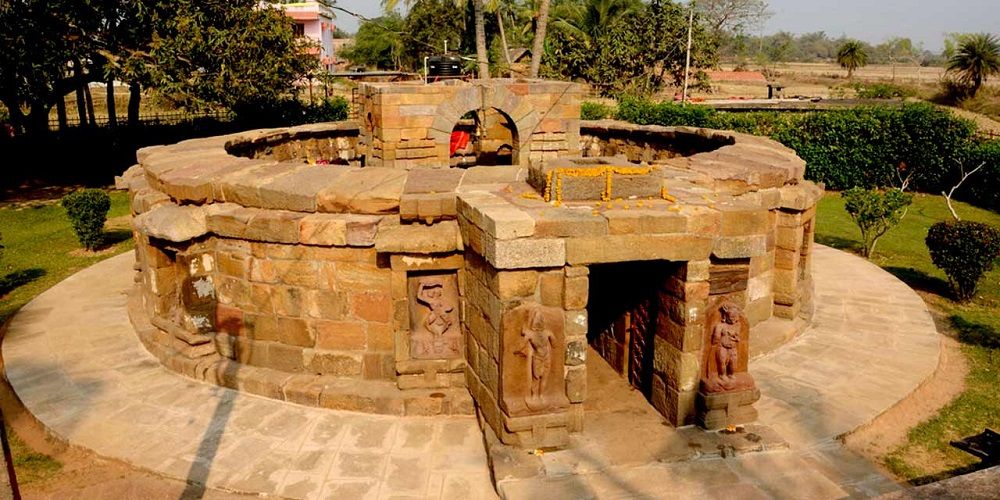 There are supposedly six Chausath Yogini Temples in India-two located in Odisha, three of them Madhya Pradesh, and one in Jirapur, which is also in Madhya Pradesh. The temple at Jirapur is however in a state of ruined, but the temple is still functional.

The little hamlet of Hirapur is located in the rural parts of Odisha. Away from the hustle-bustle of city life, or signs of modern technology, this village is located a little further away from Bhubaneshwar. For long you will find nothing but acres and acres of rice fields.

Who Are The Yoginis

Also known as goddesses or demi goddesses, Tantric realms worship Yoginis . You will usually find temples devoted to a group of them. Symbols like wheels and chakra symbolise the Yoginis. The spoke of the wheels acts as a seat for the Yoginis. This is why you will find the Chausath Yogini Temple Hirapur arranged in a circular formation.

Each of the Yoginis has a name that identifies them, and the fascinating fact is that no two temples will have the same list of Yoginis. All of these Yoginis have a different set of powers, and according to that locals go and seek their blessings.

The rituals are usually kept secret. Only those who have decided to embark on this spiritual and religious path know about them. However, in Chausath Yogini Temple Haripur, Chandi Path is a ritual to worship the goddesses.

According to experts, the Hirapur Chausath Yogini Temple was built in 9th CE. It is still a functional temple, a few of the locals still comes here and worship the main deity. For long the temple was hidden away from the prying eyes of the tourists but came into the limelight when it was discovered by Kedarnath Mahapatra of Odisha State Museum in 1953. In today’s time, the temple is under the Archaeological Survey of India and is open to visitors.

According to legends, Queen Hiradevi of Bhauma dynasty helped build this tempe. According to stories, the names town and the temple are come from the queen’s name. The locals, however, refer to this temple as the Mahamaya Temple.

When you first glance at the temple you will gasp at its architecture. It is unlike any of the other temples that you might have seen in India. Hirapur Chausath Yogini Temple is a small circular temple and uses sandstone. All of the primary deities glisten in black granite. The shrine is not gigantic or colossal.

You will also find a platform right in front of the temple called the Sun platform or the Surya Pitha. This platform was mainly for devotees who would come here to worship the Sun.

To enter this temple you will have to stoop as low as you can go, as the entry is quite narrow and low. Only one person at a time can enter the temple. You will find free intricate and wonderful sculptures of Kaal and Vikaal adorned on the walls of this narrow entrance. The beauty of this temple is that owned you go inside the entire sky opens up to you, the walls are not that high. It looks quite stunning and makes you feel warm and serene. The deities of the Yoginis stand out as they are neatly arranged and look quite stunning. Each of the Yoginis has a different posture, which you might realise after your eyes have settled down.

Inside the temple, in a circle, you will find 60 Yoginis. The other four are on a square platform. This platform is called the Chandi Pitha. You will also find four precisely designed sculptures of Bhairavas.

In the past, all of the rituals and worship took place in the Chandi Pitha.

The Mahamaya is Yogini No 31. She is the main deity of the temple, and you will find her all adorned and decked in clothes and jewellery. She looks quite stunning and regal with all the glistening jewellery and colourful clothes that compliment her body beautifully.

A raging flame is lit right in front of her. People say that this flame has been burning since the beginning of time.

The Splendour Of The Yoginis

The one thing that will capture your attention at the Hirapur Chausath Yogini Temple is the Yogini figurines. These delicately carve sculptures are a thing of beauty with, elegant hairstyles and animals that act as their pedestals. There is something so peaceful and tranquil when you look at them. It is as if they are pushing all their energies into you and unburdening you from stress.

During Navaratri, the Yoginis are also dressed up and special rituals take place during this time.

As you exit the temple after a soulful experience, you will also find a Shiva Temple, known as Sankateshwar. Painted in all white, this little shrine stands out quite elegantly. You will also find a Nandi sculpture right at the entrance of the temple covered in a vibrantly coloured scarf.

Fascinatingly you will also find an idol of Lord Krishna kept under a shady tree. How this idol kept into this temple remains a mystery, but it does add another allure to the temple.

If you wish to feel the grandeur of the Hirapur Chausath Yogini Temple, then come here for the Chausath Yogini Mahotsava. It takes places on 23rd Dec and goes up to 25th Dec every year. During this time, the temple comes alive with folk dances, lights and music that takes place right outside the temple. It is quite a thunderous fiesta, and people from all over the world come here to watch the grandeur of this festival.

The Chausath Yogini Temple Hirapur is one such sight in India that should get more recognition, owing to its colorful history and fascinating folklore. This temple is a revelation in the Indian context and only when more people visit this unique temple, will the shrine start to blossom.