The highest Shiva temple in the world; Tungnath is the third among the Panch Kedar– Tritiya kedar. This temple is situated in the mountain range of Tunganath in Rudraprayag, Uttarakhand. Lying just below the peak of Chandrashila at the height of 3680m, it is assumed to be a 5000 year old temple and has its associations with the Pandavas of Mahabharata.

Chopta, Uttrakhand lies in the evergreen forest in the part of Kedarnath wildlife sanctuary which is the base for trekking to Tungnath. Chopta offers the views of the grand Himalayan range like Trishul, Nanda Devi, and Chaukhamba. Lying in between the deodar and rhododendron forests, it gives a fabulous house to various rare flora and fauna.

According to the legends the Tunganath temple traces its links from the panch kedar temple which was built by Pandavas. It is said that the Pandavas built the temples in order to gain pardon from Lord Shiva, as they were responsible for killing their own family (Kauravas, their cousins) during the Mahabharata or Kurukshetra war on the advice of Rishi Vyas. Consequently, the Pandavas went in search of Shiva who was keeping away from them since he was certain of the guilt of Pandavas.

So as to stay off from them, Shiva took the shape of a bull and went into activity in an underground cover at Guptakashi, where Pandavas hunted him down. However, later Shiva’s body within the type of bull’s body elements rematerialized at 5 completely different locations that represent the “Panch Kedar” wherever Pandavas engineered temples of Lord Shiva at every location, to worship and praise, seeking his pardon and blessings.

Everyone is known with a locality of his body; Tungnath is known because the place wherever the bahu (hands) were seen: hump was seen at Kedarnath; head appeared at Rudranath; his navel and abdomen surfaced at Madhyamaheshwar and his jata (hair) at Kalpeshwar. It is also said that Lord Rama, meditated at the Chandrashila peak to get himself released from the curse of Brahmahatya for killing Ravana and that Ravana did atonement to Shiva when he resided here at Tungnath.

The foundation of this temple was laid down by Arjuna who was the third brother’s of the Pandava brothers. It was constructed in the North Indian fashion of design and has a dozen of temples of various other Gods adjoining the shrine.

The distinctive characteristic of this exquisite beauty that attracts a million of hindu pilgrimage and adventure seeker every year lies in its location which is amidst the beautiful mountain ranges and holy significance. Adventure lovers have a great time here trekking in the beautiful track to reach the temple.  It is the ideal mishmash of mysticism, tranquility, and magnificence thus making it a sure-shot and an idyllic getaway for all the visitors.

Chandrashila is can be visited in different seasons depending on your preferences.

However, the best time to visit Tungnath Temple is April – November keeping in mind the monsoon season. Tungnath becomes inaccessible in winters from December – February, due to heavy snowfall. When the snow starts to melt in February the route is opened for some snow seeking trekkers to experience some real adventure.  However, be the roads to Chopta are not accessible almost till March from December due to snowfall.

Monsoon is definitely not an ideal time to trek and is generally suggested not to trek during this time period to Chopta – Tungnath – Chandrashilla – Deori Tal.

By air:  The airport of Dehradun Jolly Grant Airport is the nearest airport. You can take a cab or vehicles which takes around 6.5 hours to cover up the 211 km distance from the airport to Chopta by road.

By rail: Haridwar or Rishikesh is the nearest railway station which is well connected with major Indian cities. You can take a Taxi or local bus from Haridwar to Chopta which is the base camp for Chandrashila Trek.

By road: Private buses, government buses, and taxis all the way from Haridwar Rishikesh, Dehradun, Delhi go to Chopta. Delhi to Chopta is 454 km, which takes 12.5 hours to cover by road.

It usually takes in about 2-3 hours to reach Tungnath without snow 3-5 hours to Chandrashilla from Chopta. Nevertheless, the presence of snow on the trek, makes it another level adventure. 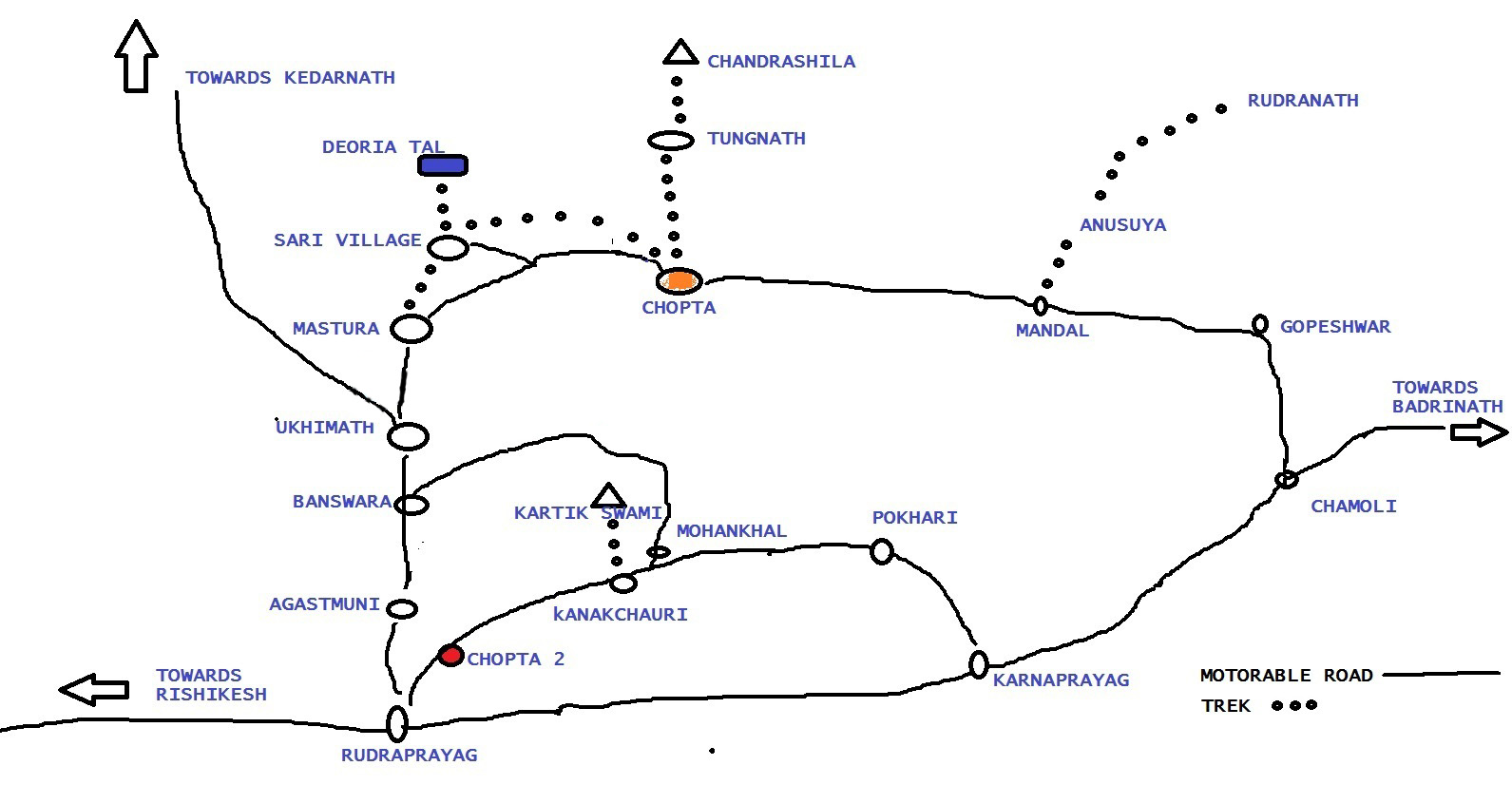 There are various hotels in Chopta which you can book from various sites or on the spot. After the trek, you can stay in tents, guest houses, and lodges which are available for an easy reside for the duration of the trek on the single as well as the sharing basis. There are various campsites available in Sari, Chandra Tal, Chopta, and Chandrashila. Whereas, Sari and Chopta have a few good guesthouses and small hotels.

This trek and the pilgrimage tour will definitely leave a sense of accomplishment while heading back home! This is one of the best holy treks which leave you in awe. So book a Uttarakhand tour package now and live this experience.

Yashita is a student, a part-time activist and has interned with CRY and NDTV trying to bring change in the society. She is a Thalassophile and paleophile which makes her a seeking wanderer. A part of her is a dancer another part a budding pollster and other parts are geeks and animal lovers. She is a high-spirited being and always on her toes to help others.